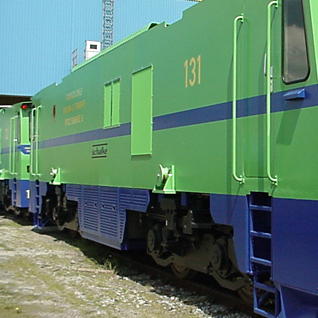 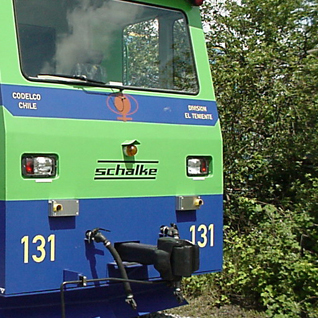 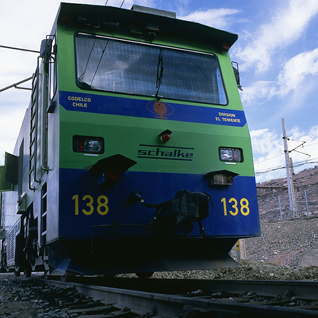 Mining locomotive for the Codelco copper underground mine in Chile

Ferrostaal Chile S.A.C. with its long experience is offering the best railway solutions and systems for the mining industry

Chile is one of South America's most stable and prosperous nations and a key regional player, with main exports like copper, fish, fruit, paper, pulp and chemicals. The mining industry especially is and remains a growth market in Chile - therefore Ferrostaal Chile focuses its business on transportation and services providing railway equipment, components and respective service solutions as a general contractor or consortium leader.

The mine operator Codelco's underground mine El Teniente has been a key account of Ferrostaal for around 20 years. Since 1996, Ferrostaal has been executing long-term maintenance contracts and taking care of the rail network and railway rolling stock. So far, Ferrostaal has supplied the world's biggest copper producer with a complete track system for its mine, including more than 20 diesel-electric mining locomotives manufactured by the German Schalke Eisenhuette Maschinenfabrik GmbH in Gelsenkirchen, one of Ferrostaal's strategic partners for the railway and underground mining business.

10 of the mentioned locomotives for Codelco's El Teniente mine are so called heavy 130 T electric mining locomotives. The locomotives transport El Teniente's daily ore production of 135,000 tonnes below and above ground. By the end of 2009 Ferrostaal delivered nine 130 T locomotives, the delivery of the tenth 130 T mining locomotive was executed in August 2015. In addition to the supply of the locomotives, Ferrostaal also executes long-term maintenance contracts for Codelco, including spare part supply as well as service and maintenance. A strong team of experts is available all year round for the servicing of the locomotives and other systems, forming an essential part of the mine operation and guaranteeing the continuous production of raw materials.

Ferrostaal has had the track system in place at Codelco's underground mine since 1996. Along with the mining locomotives and Ferrostaal's servicing of the mine locomotives and other systems, it forms an essential part of the mine operation, guaranteeing the continuous production of raw materials for the customer. Over the last 20 years, Ferrostaal was able to earn itself a reputation with Codelco not only as a reliable supplier but also as a preferred service provider. As dusty and damp conditions as well as heavy duty in mines take their toll on vehicles, a general overhaul is usually necessary after just 15 years of operation. This is also the case with the electric mining locomotives operated by Ferrostaal's customer Codelco, the first ones having been in use since 2000. With a tare mass of around 130 tons, the mining locomotives in the El Teniente mine are in continuous operation. For the first five of Codelco's 130 T locomotives, Ferrostaal is therefore taking over the so called mid-life overhaul. This involves the additional delivery of spare parts and work by Ferrostaal colleagues on the ground in Chile.

The 130 T mining locomotives are fitted with four independently driven axles. The traction converter controlled travel motors allow the individual torque control of each drive axis. A fully fledged four quadrant drive electrically brakes the mine locomotive until standstill. A highly efficient slip and slide protection system guarantees the optimum use of the available traction forces depending on the friction coefficient wheel-rail. The 130 T locomotive travels along tunnel sections that are completely automated with the help of an automatic train operation system via a serial interface of the locomotive control.